10 Comments
25.5 k Views
3
If you have been using Kodi third party addons for any length of time, you cannot have missed the controversy that always seems to surround TV Addons and the antics of its owner, Adam Lackman.  In recent history there have been a number of high profile  repo “hacks” and if you think back a little further, there was the DDOS hidden in the popular Exodus add-on.

So if you dont recall TV Addons hugely popualr Exodus add-on had some code added to it to DDOS attack another repo. This was in response to a clone or fork of the addon that TVA took exception against. This seems rather bizarre given the amount of forks that are flying around now! Here is a link to that article. Exodus Botnet We did remove a lot of the post – but heres some links showing the code and how it was added; Exodus DDOS code Target of DDOS

So lets review the repo hijacks – hotly denied, but who else has a vested interest in force installing Indigo? All of the code basically forced the indigo tool as a dependency, so even if you didnt want it – TV Addons force install their software on your device. That in any other world is the definition of a virus. An unwanted software installation.

So TVA, Adam (or you may know him as Eleazar Coding), then resurrected Exodus after Lambda quit and TVA were shutdown (and then the whole “grassing other devs” scandal blew up ). However here are two combined stories from Sept 17 and Feb 18 – Adam pushed a modified Exodus update via the Kodil repo to infect even more devices with his software. Kodil Repo Hijack – Exodus 4.xx.xx Forcing TVA addons Indigo Install !

Using the same methods as described above – by copying the repo format from an old zip file – then duplicating the setup on github, you can instantly infect and access any device that still has the old repo’s installed. This is a highly dubious practice and a malicious act aginst unwary users.   Read about this from March 18; TV Addons; Yet ANOTHER Virus!

UPDATE : 8th April 2018 – less than 24hours affter exposing this latest scam, they pulled the code. The evidence is still here: Orginal Pair Tool Zip. The latest con-trick that TV Addons have employed is forcing traffic through a crypto mining botnet through one its new tools, ” the pairing tool”  – you can see this is advertised on their site here; 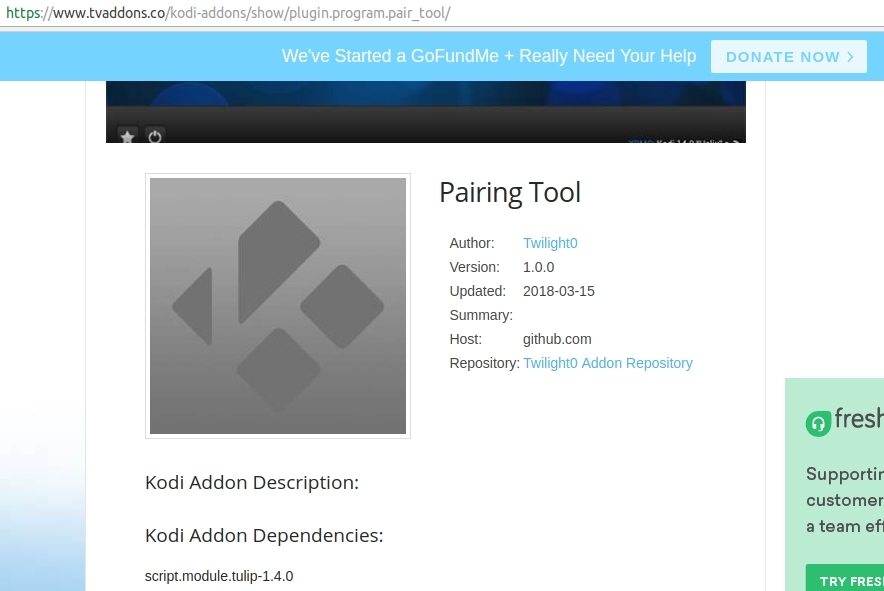 Its linked to a github repo – so the code is public and easily accessed – and with all the things TV Addons have done in the passed, they are passing this code on to countless other wannabe scammers who will employ underhand tactics to make money of you.  How much simpler this would have been to simply declare that a few seconds of your time is taken to help fund development? Too easy? Better to just lie and deceive people if you keep getting away with it right?

If you look in the zip file on github -> Download Here – you can open up the add.on.py yourself and see the following; 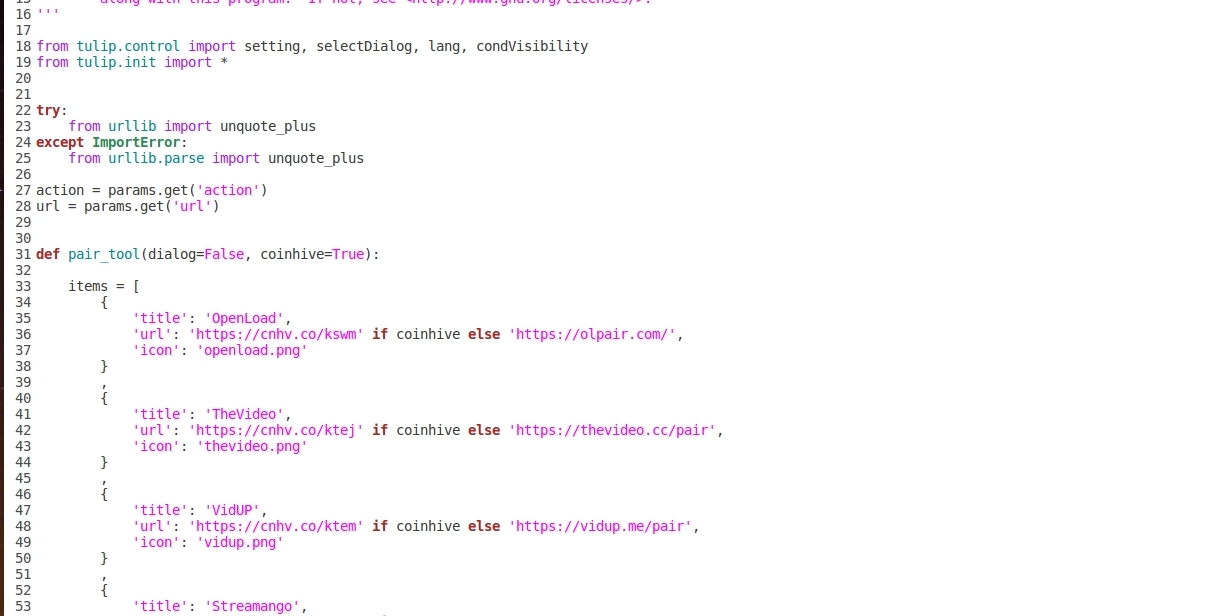 You can see that before you goto pair a video streaming site, you are redirected to a coinhive link – this is how your cpu/gpu is used to mine currency. This could affect your streaming – by slowing your device down whilst it uses CPU power to mine currency (very CPU/GPU intensive). This would be detrimental to phones or any mobile device, as it will consume a lot of battery power. The amount of CPU usage or battery drain is dependent on how the shortcut to Coinhive Javascript miner is setup – it could be lots or just a little, as there has been no admission of this or public announcment, we have no idea.

this was put to TV Addons’s Adam Lackman via their twitter account earlier today, you can see their response here; 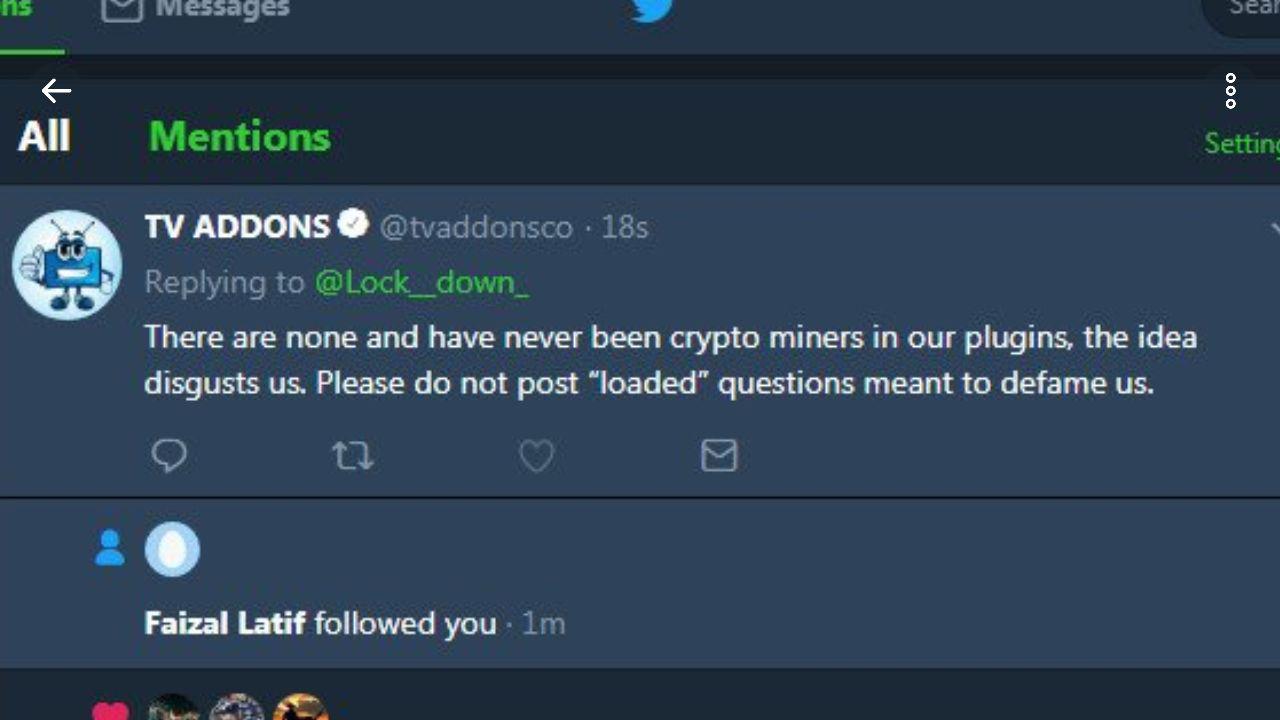 ” the idea digusts us” – interesting response Adam, clearly you didnt check even when it was pointed out, perhaps your complicit and needed the cash?

Yet again TV Addons have been proven to be liars and a source of random infections, repo hijacks, ddos bots and now Crypto mining via its users devices without permission. We have said time and time again not to use TV Addons, Kodibae, Indigo and sundry other addons this guy has maliciously hijacked. Surely it would be simpler to be open and direct with users instead of the current wave of underhand and malicious activities. You never know, people may have supported the short cut redirects – but i guess you feared they would reject it and now you are embroiled in another scandal.  SMFH.

This site uses Akismet to reduce spam. Learn how your comment data is processed.